There is one thing in this game that I don't seem to be able to figure out, I sort of know but there isn't really enough info out there about it, I have experimented with rubbish stuff jewellery and some blue stuff a few bits of purple gear (messed that up) but all I want to do is transfer attributes over without losing all the other ones and get them as high as possible.
can someone explain the process a bit so I can get my 105 gear sorted out with the attributes I would prefer, I know what I need on my armour just don't want to mess it all up again?
I am also not sure if overstating is ok so if it is then please explain.

Overstat is often the end goal of attribute shenanigans. It is okay. The Giving piece is destroyed after a transfer, and the Receiving gets the stat. It gets more complicated from there. I'll try to make all this make sense with shitty MSPaint drawings crapped out at the span of a few minutes each. For your sanity, I will hide them in handy-dandy clickable spoilers. Bear with me here:

The way it works is that ONE stat you select will be transferred. If you pick just 1, the selected stat will transfer every time (since there isn't another for the game to choose). If you pick 2, one of them will be transferred. With 3, it picks one of those, and so on. If you select more than one stat, you can't choose which of the selected stats is transferred over. You just... have to kind of hope. Thanks, Runewake. 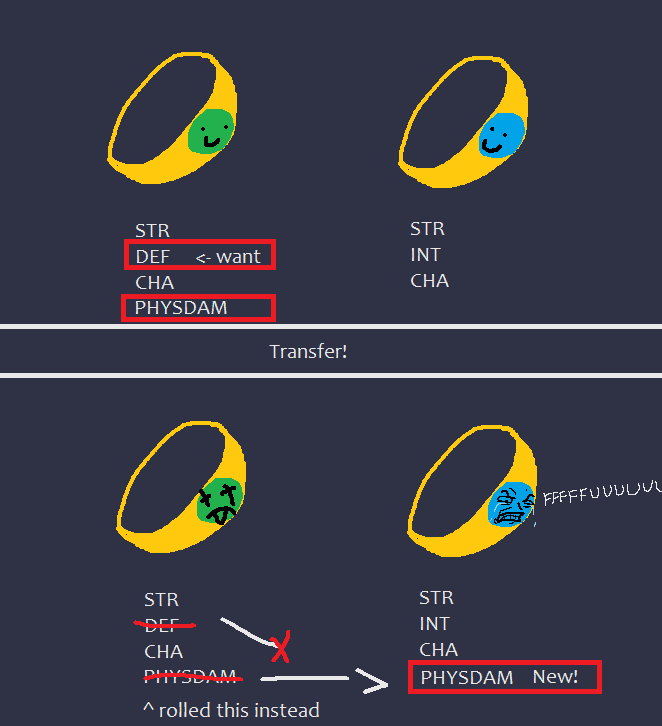 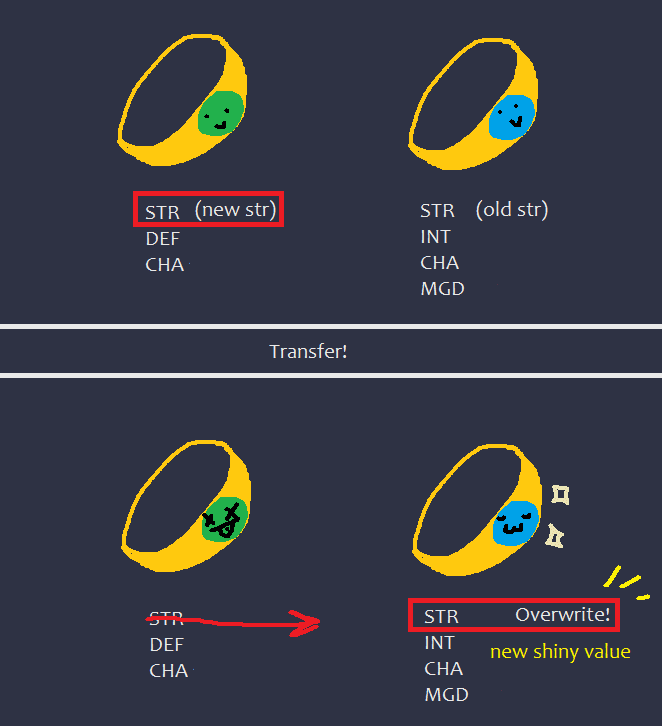 If the stat slots on the Receiving piece are full, but the selected stat is NOT on its list, then one of them will be overwritten to make room. This is also random, and you can't choose which one. You just pray to your dragon god that it doesn't erase the stat you want to keep.

The best way to avoid this is to "snip out" any unwanted stats on gear you want to keep. The option for this is the scissors-looking tab on the Enhancement interface you're doing all this in. This not only frees up room for new stats you may want, but also gives you a safety net in case something dumb transfers by mistake. Useful for early enhancement.

Once all of your gear slots are full of stats you like, you only need to select those for transfer on the Giving pieces. You may have wondered if chain-transferring is used for getting 2+ wanted stats on a Giver. The answer is yes. A horrible, terrible yes. This is the hell that is Sitheran grinding.
So that's how you swap stats around. The meat of this is the actual values. Once you get the stat(s) you want, you'll be wanting to make the numbers bigger. This is where riding Runewake's Wild RNG Ride really comes into play, and why everyone suffers through the game picking selected stats at random: ~*~* Multipliers *~*~

How many stats you pick directly influences the end value of what's transferred. Selecting 1 stat will give you 80% of it on transfer, selecting 2 will give you a straight transfer of 100% of the value as-is, and selecting 3 or more will boost it to 110% of its original value. 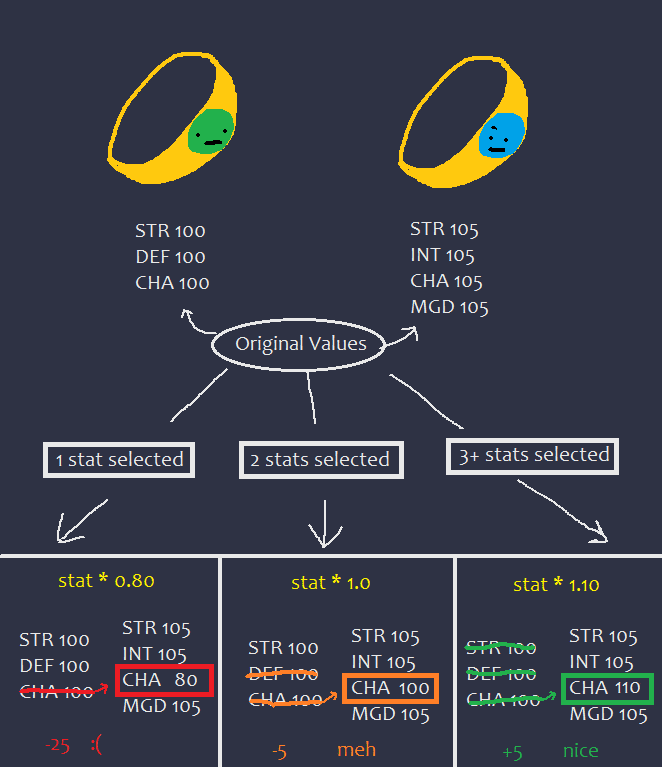 In order to increase a value (and eventually overstat) you will need to select 3+ attributes per transfer. What's an overstat? You'll see something like 300/350 on a piece of gear. Normally 350 would be the max of that particular stat roll in the game. If the value is 350/350, it turns purple to let you know it's maxed out. Overstat is to go beyond and make it something higher, maybe 390/350 like you're some kind of final form boss character. (The actual highest you can go is 121% of the max, this is just an example.) 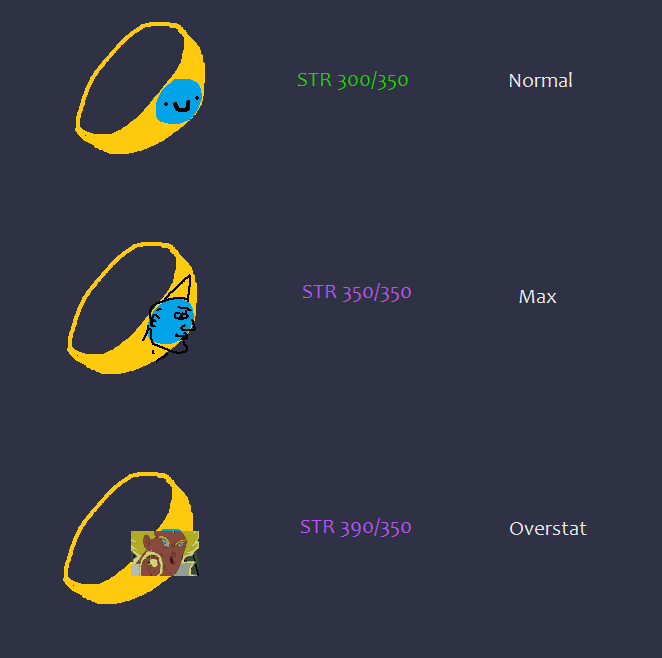 Equipment type and rarity also determines how you can transfer. Equipment types have to match; you can swap stats on a 2H Sword and a 2H Hammer, [EDIT: any two 2H or 1H weapons can have stats swapped between them as long as the hand designation matches; I dunno why my brain decided to divide by weapon class when that's a different topic. Thanks to Luatan.]. Swapping between 2 Necklaces works, but you can't swap between a Ring and an Earring. As for rarity, the Giving item must be of equal or lower rarity to the Receiving item. Your fancy purple cape can absorb a blue item just fine, but it can't absorb an orange one. (White doesn't have any stats but it's still a valid rarity so I'm including it.) 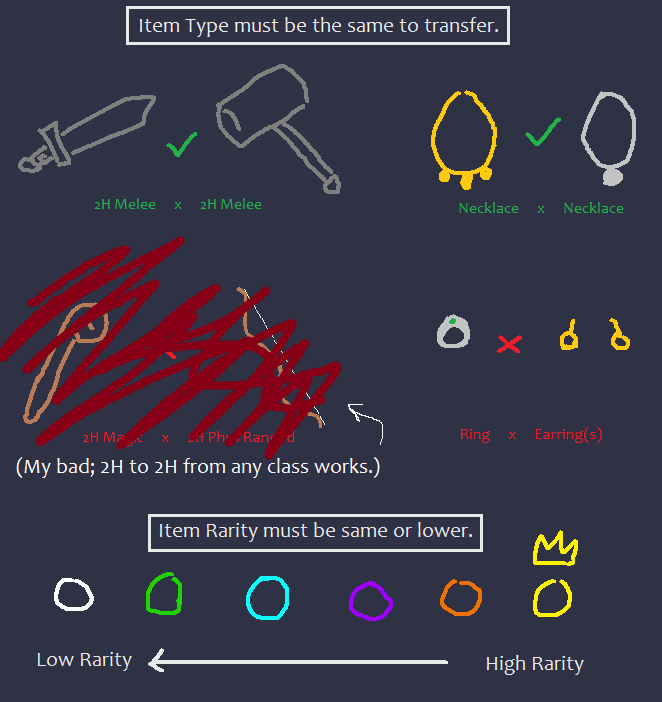 To my knowledge, all current stat transfers that consist of 3 or more selections all result in a 110% increase. It's possible that, somewhere in the game, more than that yields higher returns but I haven't seen it yet and I don't know anyone that has. That said, there aren't many madlads other than Hater that would try to transfer 6 stats off something for kicks.

I dunno if any of this helps or not, and I just kinda typed it up in a way that anyone confused could look it over and go "oh okay" since I see people ask this a ton in-game. You're right in that the game doesn't explain it well at all.

Here's a cheat sheet for a quickref thing. If you spot an error in this or anywhere else, scream at me so I notice and fix it. [Corv has received ONE (x1) scream from Luatan. Thank you.] 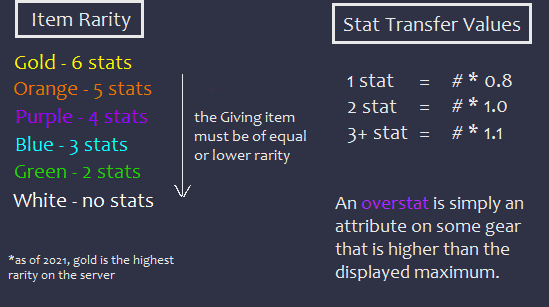 *small edits made to correct an error because I am a drooling moron when sleep-deprived
Last edited: Aug 29, 2021

-1 attribute will give you 80% of the original items selected attribute. But its also 100% success on getting that stat.

-2 attributes will give you 100% of the attribute, meaning no loss in stats. BUT, there's a 50% chance you won't get the one you wanted. (So be smart and find an item with 2 or more stats you want. Then its a win win.)

-3 attributes will give you 110% of the original attribute, that's how people get stats that say 280/278 and what not. (Be smart like with 2 attributes)

-4 attributes will give you 110% of the original attribute just like with 3 attributes.

this is prob the only thing in the game I find an issue with everything else is easy, I would rather have thee most hardest script ever to work out than this maybe its just me being stubborn.
thanks corv

@Corv You actually can transfer between magic and physical 2h weapons it does not matter. For example 2h Staff and Bow/Gunblade is possible. 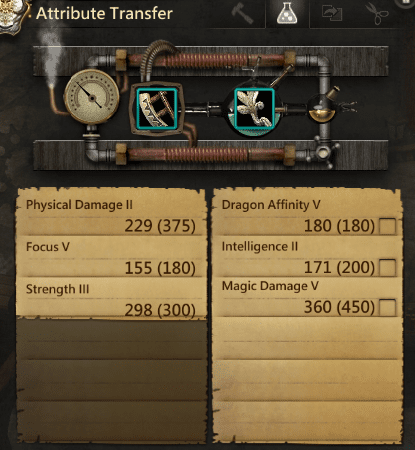 @Luatan Ahaha, I knew I'd screw up somewhere since I was passing out at the time and made it all on the spot. I'll fix that error. thanks fren

Edit: It has been fixed. I was trying to figure out where that error came from, and I think it was because I'd been explaining class weapon divisions to a new player and it got mixed in somehow.
Last edited: Aug 28, 2021

Corv said:
@Luatan Ahaha, I knew I'd screw up somewhere since I was passing out at the time. I'll fix that error. thanks fren
Click to expand...

I'm also currently working on a guide for overstating. I was wondering. Would you mind if I use one of your drawings for it?
Last edited: Aug 28, 2021

Use whatever you'd like. Hell, I can make better ones if need be, just let me know what you want as the current ones are kinda misaligned. I was just laughing in a chat about how I barely remember typing any of this. lol
Y

Hey, I understand everything until you already have your item A in which you stuck B, if you now buy item C and want to stick to A, you have 60% of bad luck and cancel your overstat. How to improve something that was improved
Y 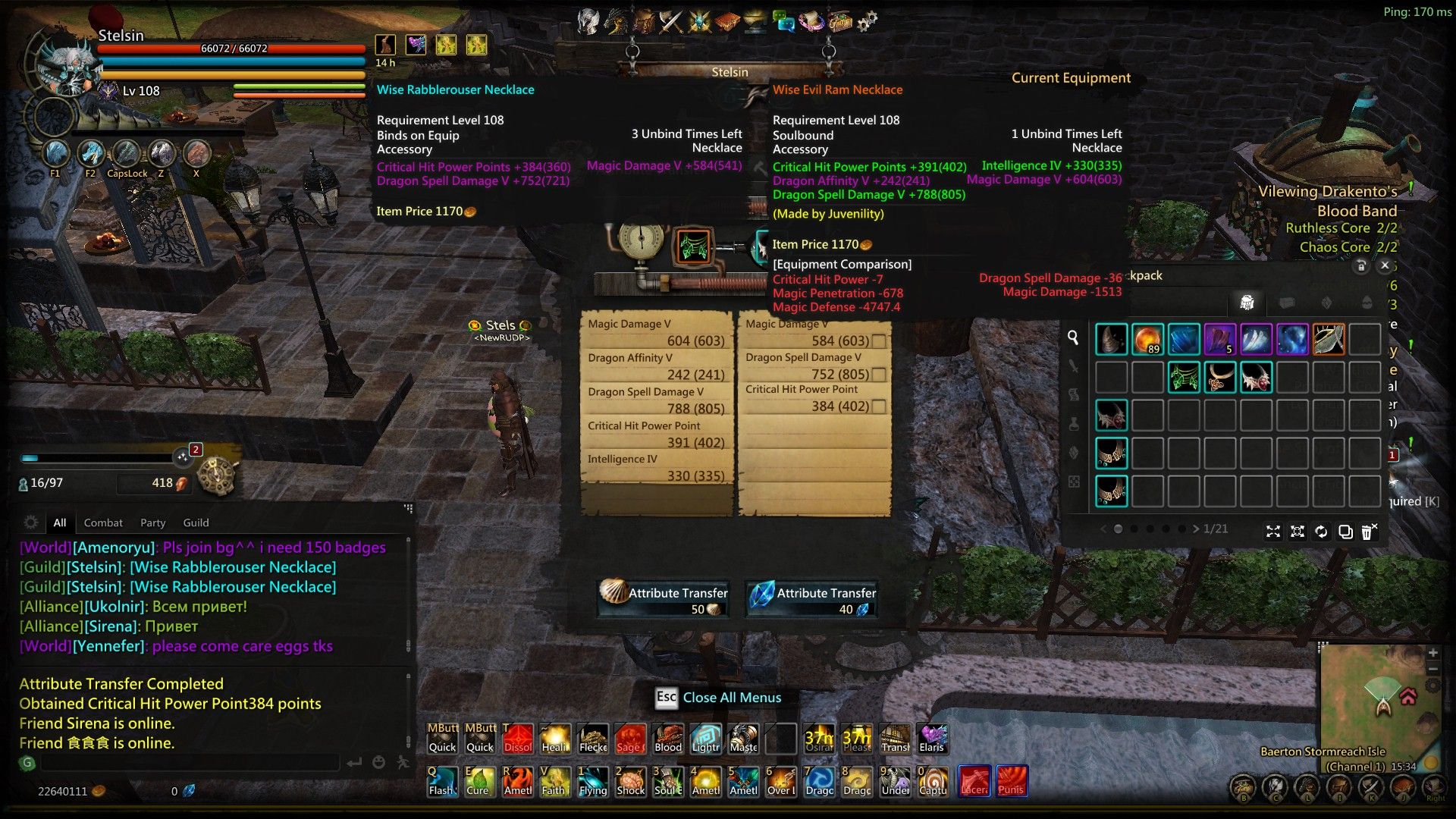 If we keep the situation of an blue item that we transfert on a orange item, another way is:
- Have 2 stats on your blue item that are not on the orange item (in addition to the stat to pass).
- Have a free space on the orange item.
So, if the correct stat passes, all is well, you have your 110% stat. Otherwise, one of the 2 bad stats will go to the free slot and do not change the stats already present on your receiving item. You just have to delete it to try again.
Y

There is no one method better than the other. On average, you will have the same number of transfers to make to have your stat overstat in both cases.
Y